It’s bleak as fuck, but it’s still one of the Cohen brothers’ best films. On the surface, No Country For Old Men is a postmodern noir Western for the age of open borders and narco warfare. However, both McCarthy and the Cohens are always reaching for biblical scale symbolism and allegory, so I believe it can be convincingly viewed through a few different lenses. I read it as grand scale tragedy of the dissolution of the American social fabric as it transitions from the Greatest Generation to the Boomers. Though the film focuses on Llewelyn Moss’ attempt to outrun and survive Anton Chigurh, the film is seen through the eyes of Tommy Lee Jones’ Sheriff Bell. He yearns for a time when police officers didn’t have to wear guns, the moral fault lines were clear, and the administration of justice was swift and certain.

In this film, our ostensible hero is a Boomer Vietnam vet who lives in a trailer with his girlfriend. He has no children and he’s retired from a welding career. He happens upon the scene of a drug deal which turned into a bloodbath and makes off with a suitcase full of cash. So the acquisition of his great treasure is not the product of a Joseph Campbell-esque Hero’s Journey or the result of sacrifice. Right away, we’re asked to place our sympathy with a character who came by his reward through sheer happenstance. He merely stumbled upon a random carcass that was collateral damage from the drug war. 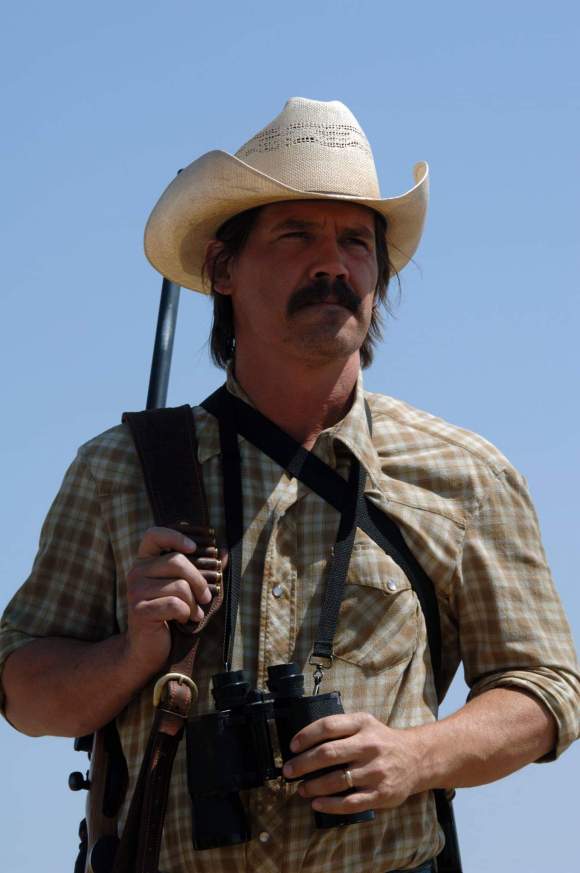 As a Boomer archetype, Llewelyn is perfect because he has a compelling mixture of damaged patriotism, trailer park chivalry, and a perverse sense of entitlement to his ill gotten booty. Since he is rendered as a Vietnam vet, his military service represents the last gasp of collective patriotism before the nation descended into a permanent posture of malaise, cynicism and discontent in the post-Watergate era. I mean, what’s wrong with scraping a little cream of the top of drug war, amirite?! Get those Benjamins, dawg! Woot!

He is pursued mercilessly and relentlessly by Javier Bardem’s cold blooded assassin, Anton Chigurh. Resembling something in between Arnold Schwarzenegger’s T-800 and Benecio del Toro’s cartel killer in Sicario, Chigurh takes on a supernatural and superhuman quality. When we’re introduced to Anton, he kills a random motorist by using a captive bolt pistol after dispatching a police officer and stealing his car. Not only does Anton seemingly kill indiscriminately, his weapon of choice is the same one used in abattoirs to slaughter cattle. This suggests a man who sees himself at the apex of the Darwinian predator/prey dominance hierarchy. He’s not bound by quaint notions of morality. That shit is for the plebs. His purpose is to be a pure conduit for Fate. Life and death are decided at the flip of a coin. He’s just the functionary whose entire existence is about ensuring that the cosmic machinery of determinism runs smoothly.

Chigurh carries out his task with a frightening level of patience, forethought, and discipline. It brings to mind the kind of methodical planning someone like Stephen Paddock exhibited in carrying out the Las Vegas massacre. When considering these qualities along with his ability to self-administer advanced medical treatment after suffering severe gunshot wounds, Chigurh is very likely a programmed assassin with deep state military training. He exhibits the qualities we expect to see in a James Bond or Jason Bourne. There’s nothing in the film that would lead the viewer to draw this conclusion and I suggest this is by design. There’s a despairing fatalism underneath this film and I suspect the Cohens want the viewer to think Chigurh is just a natural product of the modern world.

Sheriff Bell’s final lines suggest that this film is the Cohens’ lament over the passage of a more civilized and stable America. Their employment of Roger Deakins’ cinematography leaves me with the impression of their abiding love for the beauty of America. In contrast to detestable horseshit like Three Billboards Outside Ebbing, Missouri, the Cohens’ underlying affection for America always seemed sincere to me. They’re Boomers themselves so there’s more than a little bit of Llewelyn in each of them. They helped usher in the America in this film and, by extension, the world in which we live. Like Llewelyn, they too are just the lucky beneficiaries of America’s post-WW2 ascension to global superpower. That’s not to say they’re talentless hacks, but they are firmly ensconced in the Hollywood establishment. By default, they’re implicated in building the world we currently inhabit. We may nod in despair to Sherriff Bell’s grim ruminations, but I’m fairly confident the Cohens themselves are standing right alongside Rob Reiner and Steven Spielberg cheerleading for open borders.