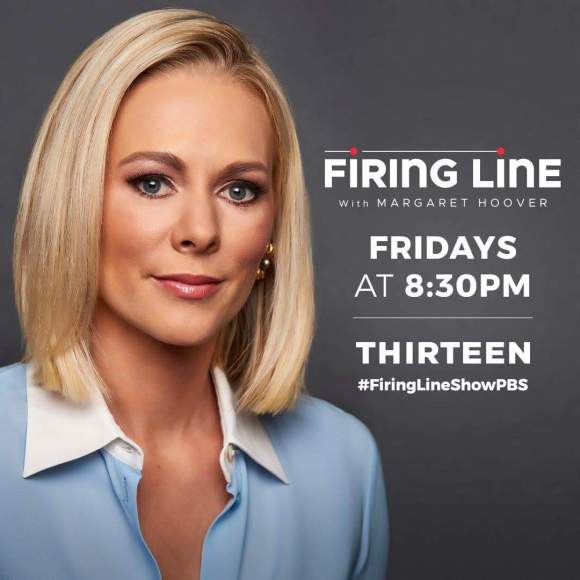 In the annals of 20th century American conservatism, few legacies loom as large as William F. Buckley’s. For better or worse, National Review remains a pace setter and barometer of modern establishment conservatism. Aside from his oversight of NR and nascent spy novel career, Buckley further distinguished himself through his current affairs show, Firing Line. With his oddly captivating air of aristocratic sophistication and a demeanor which teetered between thinly veiled disdain and genteel charm, Buckley was a champion of the marketplace of ideas long before the “intellectual dark web” were a thing.

Though YouTube has already established itself as the most accessible venue to engage in the battle of ideas for content creators of every ideological persuasion, PBS and the Hoover Institute have decided to pretend they care about civic discourse with a reboot to the franchise. Featuring the eminently telegenic great granddaughter of Herbert Hoover as host, Margaret Hoover is attempting to extend Buckley conservatism into the 21st century with her exceedingly banal and toothless brand of “Center Right” Conservatism Incorporated.

Based on the extended interview she gave to Reason’s Nick Gillespie and the episode I watched featuring “democratic socialist” rising star, Alexandria Ocasio-Cortez, I’m hard pressed to identify a single position she holds which distinguishes her from the neocon, globo-capitalist, corporatist establishment. The opening sentence of her Wikipedia page describes her as “an American political commentator, political strategist, media personality, feminist, gay rights activist, and author.” Not exactly a set of descriptors that screams “conservative”. She comes across like another progressive in conservative clothing whose sole existence is designed to placate liberals who claim to listen to “both sides”. Appealing enough to watch, but devoid of any ideas that deviate from approved establishment orthodoxy. She seems right at home alongside other anti-Trump neocon shills like Jennifer Rubin and David Frum. The show itself also seems calculated to blunt criticisms that PBS is a captured propaganda arm of the Left. I was especially interested in this episode because I naïvely assumed that Ocasio-Cortez would offer Hoover ample opportunity to challenge her narrative and present a contrasting worldview.

I know. What was I thinking? This is PBS, after all.

Buckley had a knack for setting up the guest in a manner which simultaneously highlighted his august achievements while very subtly tipping his own hand. He was magnanimous, but he was editorializing while he did it. He could even manage very sly digs. By contrast, Hoover’s artless introduction of Ocasio-Cortez reeked of over the top fangirl praise and obsequious fawning. This seemed less an introduction and more of an extension of the gushing adoration that’s been heaped at her feet by the progressive establishment since winning the nomination of the New York 14th. As Hoover ratcheted up the swooning praise with each sentence, the camera would linger on Ocasio-Cortez’ blushing giddiness. Hoover even went full Teen Vogue by mentioning her ability to sell out lipstick, and Ocasio-Cortez giggled in gleeful affirmation. It was meant to be a lighthearted moment, but for this middle age curmudgeon expecting a hard hitting current affairs show, it set up a Girls Club vibe that was tonally wrong.

The interview that followed only confirmed this impression. Bill Buckley’s once venerable Firing Line has been repurposed as Progressive Hugbox. Hoover asked wide open questions which provided ample opportunity for cross examination, and failed at nearly every juncture to challenge or engage. Where Buckley took every opportunity to present a contrasting argument and even administer the occasional smackdown, Hoover seemed content to go through the motions and play pattycakes with her guest. The whole thing was one gigantic missed opportunity. Even someone as MOR as Ben Shapiro could have made Ocasio-Cortez break a sweat. Hoover, on the other hand, seemed mostly in agreement with Ocasio-Cortez throughout!

Of all the assaults on language and deceptive word games deployed by the Left, perhaps the most odious is the pernicious lie called “democratic socialism”. Progressives who embrace the inevitable endgame of their worldview fall into two camps. One camp is the “Real socialism has never been tried” crowd and the other is “Not Venezuelan socialism. DEMOCRATIC Socialism” crowd. Alexandria Ocasio-Cortez is in the latter camp. When Hoover wisely chose to ask her to elaborate on the meaning of the term, Ocasio-Cortez did not disappoint and delivered a doozy of vacuous piffle. In the hands of any ideologically grounded conservative or libertarian, this would have been a slam dunk. Anyone worth his salt could have torn her to shreds.

Democratic socialism is the value that in a modern, moral and wealthy society, no American should be too poor to live.

Since its earliest modern incarnations, socialism has taken root in the conscience of the Left precisely because it speaks to moral instincts and the eschatological inevitability of an egalitarian, secular utopia. Ocasio-Cortez has stripped out the fact that her utopian vision requires the instantiation of vast new bureaucracies and large scale redistribution. She blithely omits the fact that it also requires the guns of the state to implement and leaves only the rhetorical ear candy. Whether this is out of ignorance, dishonesty or stupidity, I cannot say, but it’s a glaring omission regardless.

With this statement alone, Ocasio-Cortez left herself deeply exposed. Hoover could have made mincemeat out of her right then and there, but instead, she allowed her to serve up more heaping portions of brainless drivel.

Wondering: How many other House Democrats have a degree in Economics like I do?

Trying to find who out here is going to be in the Gini Coefficient Appreciation Squad.

Ocasio-Cortez likes to tout her economic credentials on social media, but she exposed herself as yet another economic illiterate peddling fanciful tales of endless, large scale economic hardship and woe.

Unemployment is low because people are working 60, 70, 80 hours a week, and can barely feed their kids.

Differences in skill level or ambition never enter into her calculus. Any disparities in outcome can be rectified by subsidizing college and pouring more money into the education bureaucracy apparently.

Along with her asinine claim that “everyone has two jobs”, Ocasio-Cortez’ assertion was thoroughly disconnected from reality. EVERYONE? Really? Again, Hoover could have eviscerated these claims, but she opted to let this steaming pile to stand unchallenged. I can’t imagine Buckley doing the same.

Also, "everyone has two jobs" is just plain wrong, since the number of workers working two jobs is around 5%, and is historically low.https://t.co/9tZooJnwKK

On the issue of immigration, Ocasio-Cortez predictably leaned on boilerplate progressive clichés and platitudes.

Hoover blew it again by completely bypassing her STATED intention to abolish ICE. Instead of taking the claim at face value and challenging her on the specifics of the plan, Hoover punted and asked her simply to expound upon her vision for broad based immigration reform.

To Ocasio-Cortez, every immigrant is a potential food truck entrepreneur or bodega owner, there is no downside to immigration, there are no issues of assimilation with which to contend, there are no criminal elements, and there are no standards that should be applied. It’s just one big multicultural Wonderland. But perhaps this is consequence of American republicanism taken to its fullest conclusion. It may be impossible to impose constraints or uphold standards on a collection of abstract principles that sanctify human liberation and equality.

However, on this subject, Ocasio-Cortez actually revealed a new and heretofore unprecedented position for the progressive Left. A tacit acceptance of American imperialism.

Instead of taking what was once a fairly conventional, antiwar, non-interventionist leftist stance, Ocasio-Cortez seemed to concede that regime change was a prerequisite for being part of the progressive political aristocracy in the American globalist imperium. She seems to want to ensure that displaced refugees will be granted automatic citizenship.

In yet another colossal oversight, Hoover completely missed an opportunity to dismantle Ocasio-Cortez’ vacuous Marxist twaddle.

The first part of the statement is, of course, correct. Laissez faire capitalism wasn’t practiced or promoted in earnest as ideology until the 18th century. Mercantilism, trade guilds and feudal economies preceded it. But the question is what exactly does she envision if she wants to see us “evolve” beyond it? Hoover wasn’t interested in finding out.

Ocasio-Cortez seems to buy into the standard Marxist view of history. Capitalism is but a necessary step in an inexorable forward march of human progress. Socialism is both an inevitability and a necessity.

Equally bewildering was her contention that we live in “no hold barred, Wild West hypercapitalism” society. This is such a painfully idiotic cliche, that it shouldn’t need to be rebutted, but these nostrums are essentially the equivalent of scripture for progressives. We live in a highly regulated, quasi-socialist market economy which is centrally managed by bankers. The staunch refusal to acknowledge the extent that government institutions, public-private partnerships and corporations all aid and abet the progressive establishment is simply astonishing. The perpetual posture of being beleaguered underdogs is beyond tiresome.

The fact that we’re still addressing these ideas lends credence to the claim that capitalism and socialism are merely two sides of a false dialectic. Clearly, there are vested interests who want these ideas to infiltrate the culture. The radical Left and their globalist sponsors have been promoting these ideas for well over a century. They wouldn’t still be around without generous patronage.

The one moment that has the rightward social media commentariat Twitter feeds ablaze was her stunning admission over the disputed territories in Israel.

I am not the expert on geopolitics on this issue!

Quite the admission from a Boston University graduate with a degree in economics and international relations. It seems like this question should have been right in her wheelhouse. What I suggest it reveals is the power of the Left’s linguistic and ideological programming. Could it be cowardice given that Israel is a longstanding punching bag for the Left? Probably not. Given that she’s been coronated as the Left’s new Fearless Truthsayer, I’d expect her to let the Palestinian Liberation flag fly.

Why bring back Firing Line?

Hoover’s abysmal performance begs one burning question. Why revive Buckley’s show at all if you’re making no effort to even attempt a genuinely conservative approach?

I wanted to be enthusiastic about this show, but it feels a little bit like the current affairs equivalent of the 2016 gender swap Ghostbusters reboot. A shameless attempt at reviving an intellectual property that once had cultural cachet. What’s so edgy about another anti-Trump establishment neocon who gives a socialist a free ride? If Bill Buckley were alive today, he’d likely find his encounter with Gore Vidal a quaint memory. He’d probably be relegated to hosting demonetized Google Hangout streams on YouTube while fighting back accusations of being alt-right.

How many PBS viewers are truly interested in the battle of ideas at this juncture? What percentage of their audience are aging boomers just trying to uphold the delusion they’re interested in an opposing perspective?

Margaret Hoover represents exactly the kind of bland establishment conservatism that propelled Trump to the White House. National Review’s Against Trump issue only fueled the perception that the conservative intelligentsia were out of step with the grassroots. We’re living in a time when the very idea of conserving national borders is considered tantamount to the reopening of Auschwitz. A reboot of Firing Line with an assertive host could have been a positive contribution to public discourse. Too bad we got Progressive Hugbox instead.