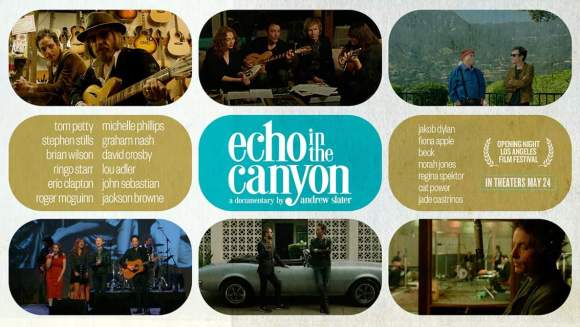 There’s one scene in Andrew Slater’s love letter to the seminal Laurel Canyon musicians that sums up the entire film. In one of many interview segments led by Jakob Dylan, Graham Nash gets all misty eyed as he looks back on those heady days of creative ferment and unbridled hedonism. “I still believe music can change the world,” he says just barely holding back the tears. Just then, it cuts to Jakob Dylan as he let’s Nash’s words hang in the air. He stares off into the distance, but to his credit, his expression reveals nothing. Maybe he’s taking in the full weight of Nash’s sentiment and genuinely feels a sense of humility. Or maybe he’s silently scoffing at Nash’s audacity for uttering such a pitifully idiotic and painfully maudlin platitude that no one really buys. Maybe he knows that Nash is just regurgitating a mythology that needs to be perpetually reinforced through books, awards shows and rockumentaries. Maybe it’s something in between.

Much like its recent companion, Rolling Thunder Revue, Echo in the Canyon has the distinct whiff of the establishment patting itself on the back. These were musicians who presented themselves as rule breaking revolutionaries, yet the film wants you see them as the torchbearers of the rock “tradition”. Herein lies the great conundrum that the Flower Power Generation cannot reconcile. As anyone who’s read David McGowan’s excellent and far superior survey of the Canyon scene knows, these people were already children of the establishment. They made great music, but they were also trafficking a lot of social degeneracy. The film only scratches the surface of the extent of the hedonism these people were importing into the culture.

As expected, there is no mention of the dark underbelly of the Canyon scene. They completely sidestep the body count and the mysterious deaths that amassed around these people. They completely ignore Charles Manson’s proximity to the Beach Boys and the Mamas and the Papas. There’s no discussion of the various mob, military and CIA connections behind the clubs and the record industry. This may explain why the scene in which Beck, Regina Spektor and Dylan attempt to philosophize over the broader cultural impact of these bands feels forced, artificial and utterly laughable.

They talk about the drugs and the sex, but you know they’ve completely sanitized it. Hearing Michelle Phillips talk about her affair with Denny Doherty isn’t titillating or cute. It’s pathetic and contemptible because it radiated out into the culture and wrought tragic results. Where were the uncensored interviews with Carnie and Wendy Wilson and Chynna Phillips to give their unfiltered perspective on what it was like to grow up with these paragons of parental excellence? These people knew exactly what they were doing, yet we’re expected to treat them like royalty.