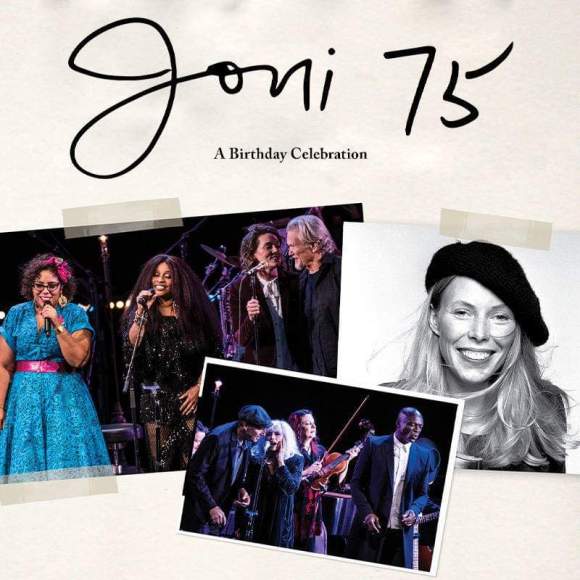 This concert film showcases everything that is simultaneously wonderful and loathsome about the Flower Power generation. Filmed over the course of two nights at the Dorothy Chandler Pavilion, Joni 75 features an all star cast of peers and proteges who came to pay tribute to one of the modern era’s most unique and influential artists.

Originally hailing from Alberta, Mitchell’s career took root in the ferment of the now infamous Laurel Canyon scene. Despite her reputation as an icon of the allegedly counterculture 60’s, Joni Mitchell remains a true maverick amidst a sea of revolutionary wannabes. She has demonstrated a remarkable ability to both avoid the ideological pigeonhole that defines her more openly partisan peers and sustain artistic vitality in an industry which disfavors innovation.

With a career that spans 19 studio albums over the course of more than 50 years, Mitchell has attracted a following that draws from the worlds of pop and jazz. She’s that rare artist who can leave the listener’s heart wrenched by the immediacy of her lyrics while the musicians in the audience all puzzle over her unusual chord changes. Backed by a top notch band, Joni 75 featured performances by Brandi Carlile, Glen Hansard, Emmylou Harris, Norah Jones, Chaka Khan, Diana Krall, Kris Kristofferson, Los Lobos with La Marisoul, Cesar Castro & Xochi Flores, Graham Nash, Seal, James Taylor, and Rufus Wainwright.

On the one hand, it’s a beautifully shot, recorded and performed concert featuring some of our finest artists singing mostly successful covers from the Joni Mitchell songbook. It’s unfussy and straightforward. The footage of artists showering Joni with praise is kept to a merciful minimum. Surprisingly, Peter Gabriel’s prerecorded tribute had a rare moment of honesty when he suggested that she’s probably a raging cunt when you have to work too closely with her.

On the other hand, despite its ostensible goal of just being a straightforward concert film, it couldn’t help but draw attention to its own wokeness. The band was so #DIVERSE! The guests were so #INTERSECTIONAL! Oh snap! Rufus Wainwright just mentioned his HUSBAND! What’s Mike Pence going to think?! And of course, Graham Nash just had to politicize the whole thing. What should have been a sweet remembrance about the creation of the song “Our House” was completely poisoned when he linked it to the 2018 election results. Way to convince people you aren’t raging totalitarians underneath all that hippie horseshit, Graham.

The film also draws attention to the question of whether multiculturalism and universalism are in fact mutually exclusive propositions. While Joni has taken public positions that set her apart from the rigidity of contemporary woke orthodoxy, the concert felt like another self-congratulatory advertisement for multiculturalism and immigration. This was especially true of the treatment Los Lobos and La Marisoul gave to “Nothing Can Be Done”. It’s a vibrant and joyful rendition that gave the song a Mexican flavor while being propelled by a gentle quasi Afro-Cuban groove. Chaka Khan’s ecstatic interjections managed to elevate it even further. It’s the kind of cross cultural collaboration that we’re supposed to celebrate as sophisticated cosmopolitans. Yet at the same time, the Woke Stasi are constantly browbeating and shrieking at the unenlightened rubes about the nefarious evils of “cultural appropriation”.

Is multiculturalism a melange from which anyone and everyone can freely pick and choose? Or is it a collection of disparate subcultures which must remain within the confines of their respective people groups in order to retain uniqueness? Or is it just another excuse for SJWs to be selectively outraged over fake transgressions?

More importantly, is multiculturalism building a universal culture? Or is it appropriating different cultures only to strip mine them of their context and uniqueness? Is it just a self-reinforcing orthodoxy which operates on the presumption that there is no downside to infinite immigration? Does it inculcate an unwavering belief that there are no issues of cultural assimilation and that the future that awaits us is a rainbow hued utopia of vegan taco trucks, body positive belly dancing and gender neutral drum circles? Is it just an excuse to revel in a smug sense of cosmopolitan moral superiority? Does the obsessive liberal quest for global “oneness” degrade cultural distinctions or enhance them? Is it just an excuse for progressives to be selectively outraged over “racism” in one moment while in the next moment being selectively outraged over “cultural appropriation”?

I love Joni Mitchell’s music. The artists mostly did a great job. It was beautiful but also kind of sad that a collection of aging wealthy Boomers still affect a pretense of being edgy revolutionaries. That somehow, another collection of self-satisfied children of the establishment celebrating their engineered cultural revolution as an unqualified success was finally going to convince the unenlightened peasants of flyover country that they’re stupid and backwards. I mean come on, bigots. “Big Yellow Taxi” is the theme song for the Green New Deal! Get #WOKE!

Perhaps what I heard in Joni’s gnostic rallying cry for the Age of Aquarius was something she didn’t necessarily intend. When James Taylor delivered a heartfelt rendition of “Woodstock”, it wasn’t heralding the advent of a secular New Eden. It was, in fact, the sound of a generation that has spent its entire adult lifetime trying to convince you that its complete monopoly of institutional consensus is the height of counterculture and rebellion. That all you need to usher in the final revolution is to don the pussyhat, hoist the placard aloft and post that fist pump to Instagram, baby. And that, my friends, is the sound of exhausted desperation.

We are stardust, we are golden
We are caught in the devils bargain
And we got to get ourselves back to the garden