If you know who Marina Abramović is, you probably already have an opinion about her. Chances are you aren’t neutral or lukewarm about her either. This is understandable because Abramović has actively courted controversy throughout her career, and the controversy certainly isn’t limited to her artistic output. Though I’m someone who’s spent his artistic career on the modern and avant garde end of the spectrum, my own familiarity with Ms. Abramović prior to this exhibit was limited to the controversy surrounding her secretive exploits with ruling elites rather than her public artistic output. While I realize that making a distinction between her public art and the darker clandestine activities may be a dubious proposition, I initially hoped I could set aside all allegations pertaining to the dark underbelly of her work for the purpose of this review. After seeing this exhibition, I’m not sure that distinction can be made between these two spheres of activity.

The Cleaner is a career retrospective running at the Palazzo Strozzi in Florence, Italy. Her appearance at the Palazzo Strozzi is partially due to the fact that the early years of her career were spent in Italy. I must confess that after taking in so much classical beauty in Florence, the content and fanfare surrounding this exhibit was jarring when stacked up against the city’s numerous treasures.

The exhibit features her earliest visual works and performance pieces up to her present works which invite participation from the audience. At the most superficial level, Abramović belongs to a well established “tradition” of provocative performance artists that runs the gamut from Annie Sprinkle to Chris Burden up to rock agitators like GG Allin and Marilyn Manson. The notoriety she’s received as a performance artist provocateur is noteworthy because her visual works reveal no deep artistic skill whatsoever. This is, of course, a critique that has been leveled at avant garde artists since the beginning of the modern era. Since she doesn’t aspire to classical standards, it’s unrealistic to expect them. Like all of her predecessors, Abramović is not aiming for any kind of classical conception of beauty or objectivity. In the text that accompanies her piece Art Must Be Beautiful/Artist Must Be Beautiful she openly confesses her intention to “destroy the image of beauty”.

Abramović aims to provoke, upset, shock and challenge the audience. This urge to negate, agitate, disrupt, invert and dismantle is the quintessentially Luciferian/Gnostic impulse that animates the modern age. This is precisely why I believe Abramović performances are correctly viewed as rather explicit occultic invocations and ritualistic workings despite her contention that it is art. 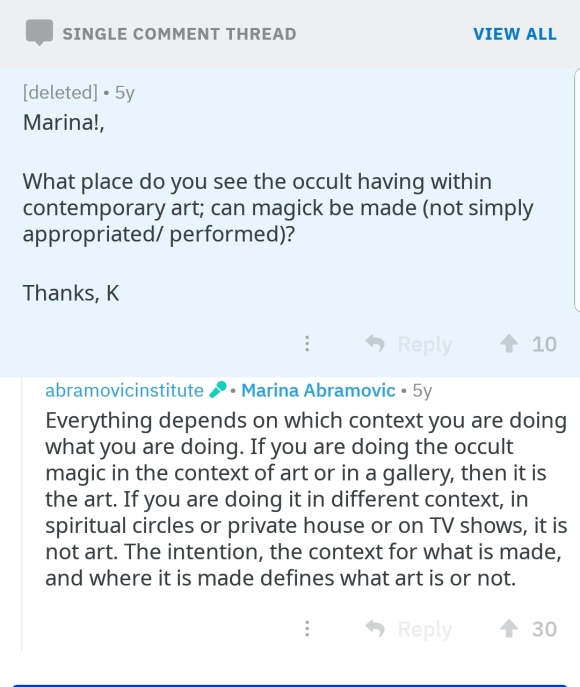 The most obvious examples are three of her most notorious performance pieces, Rhythm 10, Rhythm 5 and Rhythm 0. Whether the text was written beforehand or afterwards is not clear, but they sound very much like the rituals one would find in Thelemic scripture or the Babalon workings of Jack Parsons. I suggest that even the numbers and performance durations contain occulted meaning. All involve self-inflicted injury or the possibility of extreme harm. Whether ingesting prescription drugs to induce seizures or subjecting herself to various forms of self-mutilation, Abramović repeatedly tests the limits of her own physical stamina and the boundaries of the audience’s patience. Because she is able to affect (channel?) an air of detachment, she invites a ghoulish and sadistic fascination. In the case of Rhythm 0, she seems to be actively encouraging the audience to drop their inhibitions and violate her. Apparently, that’s exactly what happened when it was performed in Naples in 1974. It’s difficult to imagine Rhythm 5, a piece in which she lies in the center of a burning 5-point star, as anything other than a magickal invocation of some kind. It was supposedly a “challenge” to her parents and her communistic upbringing, but if that’s what she really wanted, she’d have converted back to Orthodoxy like her grandfather. That would have been genuinely transgressive. The notion that this piece is a challenge to any state or religious institution is laughable.

On a side note, I couldn’t help but think that the knife trick scene performed by the replicant Bishop on Bill Paxton’s character in the 1986 film, Aliens, bore a similarity to both Rhythm 10 and the Ulay/Abramović collaboration AAA AAA. This may seem like a leap on the surface, but given the Crowleyan overtones of the Alien series, I suggest it’s not as far off as it may seem. In Rhythm 10, Abramović lays out 20 knives and proceeds to stab the knife between her fingers as fast as she is able. Through the course of the performance, she records the rhythms of the knife impact while ignoring the bloody cuts to her fingers. A similar ritual involving the blood of goslings and cats is outlined in The Key of Solomon, an ancient grimoire designed for the conjuration of 72 demons. Abramović performed this piece at age 27 which is an inverse reference to the number of entities summoned.

The Lips of Thomas

The piece that perhaps best embodies this combination of lurid allure, occultic invocation and pretentious twaddle is the Lips of Thomas. Inspired by the androgyny of Swiss artist, Thomas Lips, this is a piece which begins with Abramović consuming a kilo of honey and then a liter of wine. She proceeds to carve a 5-pointed star on her abdomen just above her pubic area. Naturally, she carves the shape in such a manner that her navel appears as the All Seeing Eye atop the bloody flesh pyramid. She lies down on a crucifix of ice blocks with a heating lamp placed above her body sigil. After some time, she then proceeds to flog her numbed backside with whips until the audience cannot stand it any longer. The piece is meant to last seven hours, but I simply can’t imagine that people would actually submit themselves to that kind of experience. This reinforces the proposition that Abramović is making the audience unwitting participants in a ritual. She is actively seeking the obliteration of the self and to bind herself with the audience in an alchemical union.

It was like an electric current flowing through my body, as if the audience and I had become one. A single organism. The sense of danger in the room had united the audience and me at that moment: we were here and now and nowhere else. – Marina Abramović : Autobiography (2016)

The merging of opposites into a transcendent unity is not just a recurring theme in her work, but it’s the animating principle behind most of the Western esoteric tradition. This was a very explicit theme in her numerous collaborations with artist and former lover, Ulay. In addition to the video screens projecting vintage performances of the various pieces from their peak period, there were two naked performers recreating Imponderabilia. In this piece, the two performers form doorposts between which the audience members are asked to pass while choosing one subject on which to gaze. The relentless ululations of Abramović and Ulay leant an air of ritualistic ardor that was somewhat disquieting. Is this a reinvention of the Masonic symbolism of the pillars of Boaz and Jachin with Abramović and Ulay standing in as living manifestations of the male and female divine principle? I suggest it is. The ideas of duality and symbiosis fusing into an alchemical whole is the recurring theme throughout her work. Many of the textual explanations of the pieces make aggrandizing references to the authorities shutting down the performances. Ironically, I was instructed not to video anything while I was exploring the exhibit. Obviously, she’s proprietary about her work, but I find it funny that she affects a pretense of flaunting authority but expects her audience to respect the authority of the museum staff and follow the rules. You’re such a rebel, Marina.

Transcendence and portals into the world of the spirit seem to be the themes unifying most of the installations and performance pieces from the recent decades. The usage of crystals and stones has a longstanding association with followers of New Agey hokum, Wiccans and practitioners of witchcraft, but Abramović takes the idea to a whole new level. The Cleaner featured several installations involving crystals that people were invited to use. If crystals are meant to either channel energies from higher realms or invite entities from other dimensions, Abramović left no doubt that this was the purpose of these installations. Video footage from her 1997 spirit cooking “performance” indicate that these stones were a critical component of this “exhibit”.

While I’m glad I had the opportunity to see this exhibit and judge her work for myself, I also left having the distinct impression that Abramović had achieved her purpose. In other words, her ideas already permeate the culture. Maybe I’ve become so inured to the omnipresence of these ideas that none of it felt transgressive or shocking. In fact, much of it felt juvenile, pointless and stupid. Whether it’s the Crowleyan grotesqueries of Fecal Matter, the sadomasochism of the Genitorturers, or the overt references to Satanism and witchcraft that fill the mediasphere, Abramović’s work feels hackneyed and redundant even if she played a seminal role in mainstreaming the ideas. Given the fawning adoration she receives from the celebrity class, the fact that her work is regarded as a method for spiritual development, and her close proximity to the highest echelons of the power elite, there is little doubt that Abramović was given a sanction to blur the line between ritual and performance art. But the truth is that Abramović’s work should be shocking because she’s dead serious about this shit. This isn’t some pimply faced adolescent goth buying a votive candle from the occult bookstore to light while reading HP Blavatsky. This is someone who gets celebrities to eat cakes shaped like humans. And given that this is someone who paints the walls with pig blood for the public, who the fuck knows what’s in that cake? You wouldn’t have charismatic Youtubers like Jaclyn Glenn happily chirping about the benign virtues of crystals and witchcraft without Marina Abramović blazing the trail first. Occult ideas are so commonplace, very few think twice about them. It’s increasingly bound together with the gauzy platitudes of contemporary SJW piety. And for that reason alone, Abramović and her work should be regarded with skepticism and contempt.

The joke’s on you, proles.