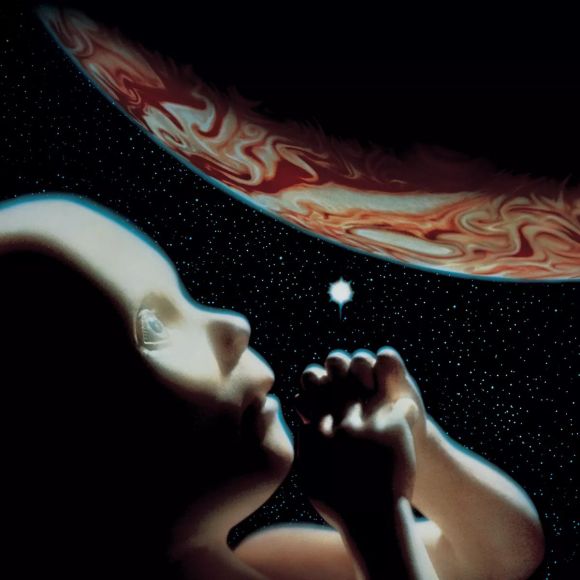 2001: A Space Odyssey has inspired numerous analyses over the years, but considerably less attention has been devoted to its successor, 2010: The Year We Make Contact. Following up Stanley Kubrick would be a difficult task for any director, and Peter Hyams deserves more credit than he’s been given. Written, directed and produced by Hyams, 2010 is completely worthy follow up to Kubrick’s 1968 landmark film. Set 9 years after the events of the first film, 2010 portrays the US and USSR simultaneously engaged in a race to recover the Discovery from Jupiter’s orbit and unlock the secrets of the monolith while trying to prevent Cold War geopolitical tensions from escalating.

Just as 2001 could be described as the first significant Masonic evolution allegory with transhumanist overtones, 2010 touches on all the same core ideas. It distinguishes itself by placing greater emphasis on the globalist and scientistic ideology through which these more esoteric ideas are transmitted. The Luciferian spiritual implications of the story are considerably more explicit in this film as well.

I further contend that 2010 is an overt nod to Russian Cosmism; the ideology that appears to be the forerunner to transhumanism as it’s currently being promulgated. Aside from sci-fi films that were made in the USSR, 2010 is perhaps the only film I can recall which takes place on board an advanced Soviet spacecraft. The name of the spacecraft is itself a reference to Soviet spacewalker, Alexey Leonov. This serves two purposes. It portrays the socialist USSR as being technologically superior to the US despite the opposite being true. Second, it makes you sympathetic to the Soviet crew and their thirst for knowledge while eroding the stigma that was built up around communism throughout the the Cold War. Don’t listen to those dumb conservatards who bash communism, proles. They’re just aping the fearful, warmongering douchebags in the GOP who have no empathy for human progress! It lends credence to the possibility of the entire Cold War dialectic being at least partially engineered. In other words, communism and capitalism are just two sides of the same ideological coin which have been pitted against one another for the express purpose of creating manufactured global tensions. It could very well also suggest that these two national space programs were part of the same global psychological operation from the start.

Besides being the more technologically advanced society, the USSR are also portrayed as being more advanced on gender equality. As Captain Tanya Kirbuk, Helen Mirren plays the steely but vulnerable feminist archetype we continue to see portrayed in film and television ad infinitum. This is arguably the one time we’re seeing feminism so explicitly connected with its socialist roots. Kirbuk is also Kubrick in reverse, so it’s also one of two overt references found in the film. 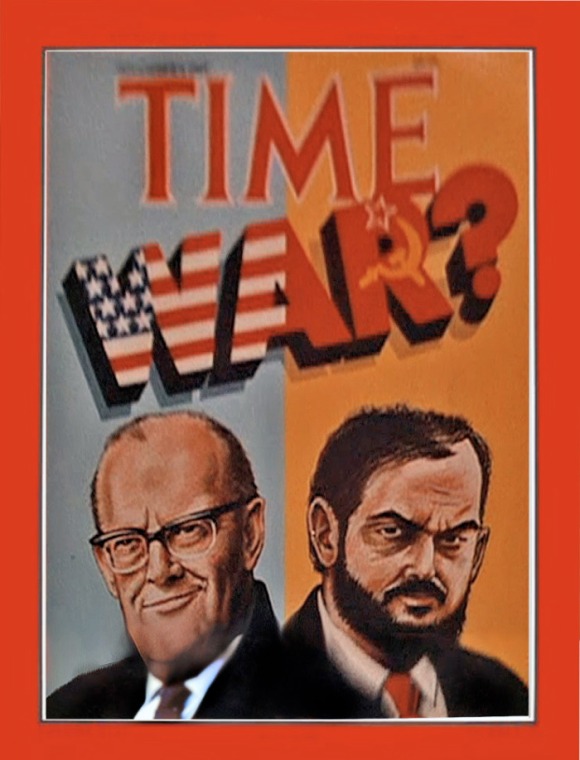 The opening scene sets up a perfect visual metaphor for the entire film. Roy Scheider’s Heywood Floyd is working atop one of the radio telescopes located at the Karl G. Jansky Very Large Array. Dana Elcar plays Soviet scientist, Dimitri Moisevitch, and approaches him to discuss the US efforts to retrieve the Discovery. Floyd is symbolically sitting atop the lofty perch of presumed technological and political superiority of the US talking down to the dirty commie scientist from the USSR. Mirroring the US geopolitical stance of opposition, he is reluctant and initially refuses. Reminding him that they both have higher allegiances to scientific discovery, he offers to meet him halfway up the tower. Floyd assents to his overture and agrees to two minutes of truth telling. Moisevitch informs Floyd that USSR will reach the Discovery two months before the Discovery II. Subsequently, the Leonov crew will need the expertise of the Americans in order to make the journey worthwhile. After offering to allow an American team passage on the Leonov, they proceed to speculate about how they must sell the proposal to the politicians to whom they’re beholden. Complicating the entire mission is a Cuban Missile Crisis-type entanglement which carries the threat of total nuclear annihilation. Where politicians routinely engage in rhetoric veiled in dishonest platitudes, bellicose posturing and vacuous pronouncements, scientists must fearlessly seek truth wherever it may lead! Once again, we’re presented with space exploring scientists as the vanguard of discovery, bravery and enlightened, cosmopolitan virtue.

Like 2001, transhumanism plays a very significant role in 2010. As Dr. Chandra, Bob Balaban is the AI specialist who is conscripted for the mission to reactivate HAL and discover the reason for his apparent malfunction. Mirroring the plot device we saw in Ridley Scott’s Alien, we learn that HAL did not malfunction. He was assigned to hide the fact that the NSC programmed him to go after the monolith at the expense of the crew and simply had the AI equivalent of a mental breakdown trying to reconcile conflicting protocols. At a crucial turning point in the film, Chandra is himself emotionally distraught over the prospect of explaining to HAL that he and the Discovery may very well be destroyed in order to make their accelerated launch window. After all, AI’s have RIGHTS, you know. While the idea of according rights to an artificial intelligence is now somewhat commonplace in media and entertainment, this was certainly one of the early examples of this phenomenon in film. In Arthur C. Clarke’s book, we learn that HAL’s “soul” joins Dave Bowman in the presumed elevated realm of consciousness to which he has ascended.

The full title of the film is 2010: The Year We Make Contact. Since most major films contain pieces of predictive programming, with what exactly were Hyams and company predicting contact? One of the big moments in the film was the discovery of chlorophyll on the surface of Europa. Some unknown energy surge conveniently destroys the ship logs and, ironically, the crew are expected to take their observation as an article of faith. It oddly mirrors the recent revelation that the original moon landing tapes have been mysteriously “erased”. Obviously, we didn’t discover a monolith or travel to Jupiter, but lo and behold, there were claims of possible microbial life coming from NASA. I suppose the launch of the space shuttle Discovery was also another coincidence. Though it was launched in 2011, the Juno mission also seems to dovetail into this narrative.

Perhaps this quest for contact wasn’t limited to the possibility of alien life. Maybe it was an encoded reference to the search for the infamous God particle being carried out by CERN.

Other pieces of predictive programming include Roy Scheider’s Apple IIc home computer and the biometric scanner in Chandra’s corporate office. Another oddity is the inclusion of Floyd’s two pet dolphins. While this could be a reference to John C. Lilly’s LSD experiments or the militarization of dolphins, it could also be an early step in the normalization of interspecies “love”. It is also noteworthy that Scheider went on to act in the Spielberg produced SeaQuest 2032 which featured a genetically engineered dolphin.

The fact that this was released in 1984 shouldn’t be overlooked either. The film was extrapolating a mere 26 years into the future, but was speculating about astronomical leaps in technology and space travel. Like many early works of futuristic sci-fi, 2010 presents a future of unbounded scientific progress. In comparison to the neverending conveyor belt of dystopian hellscapes to which we’re routinely subjected, this film’s optimism does seem refreshing. That said, I also believe it was presaging the world of total information awareness in which we live. Just as feel good cinematic messages can mask nefarious agendas, feel good political legislation can be passed in order to advance the goal of full spectrum panopticism.

Above all else, 2010 is presenting another Luciferian spin on man’s origins and destiny. In 2001, humanity was raised up from primordial ignorance by the material manifestation of a higher intelligence. This allowed Dave Bowman the ability to achieve his transhuman gnosis. In 2010, Dave Bowman is both a reincarnated transhuman Jesus and Yahweh. Bowman appears to Floyd/Moses like a holographic burning bush and instructs him to leave Jupiter’s orbit and return to Earth in two days. Filled with gnostic revelation, he disregards the diplomatic sanctions placed between the crews and boards the Leonov. Once again, the hard bitten scientists are faced with knowledge that transcends the material and enters into the realm of the spirit. Should the Russians forego the political tensions in which their earthbound compatriots are embroiled and trust the Americans? As ascended beings who are engaged in their own communion with the cosmic infinite, they agree to heed this seemingly miraculous message from the Beyond.

As they blast off, Jupiter begins to implode. Just as they reach safety, Jupiter ignites into a new sun which bears the name Lucifer! As in, Lucifer the light bearer. As they witness this miracle, the instructions from Yahweh/Bowman appear on the monitor screens on the Leonov and everywhere else on Earth. The voice of Yahweh will come to you too through the television screen or the computer monitor, proles. We will learn to unite as One World just like the crews of the Discovery and Leonov.