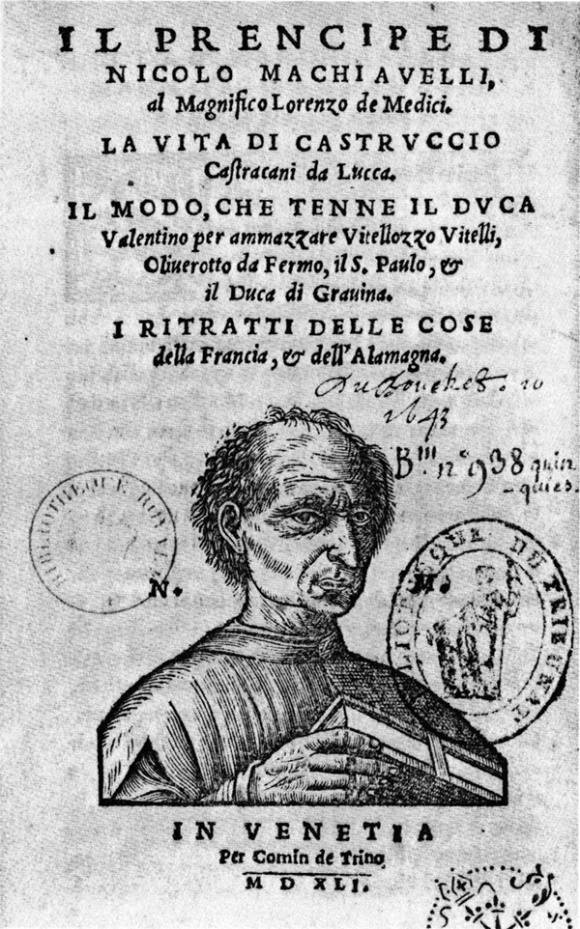 He’s living in exile and writes The Prince in order to get back in the good graces of the Medici family, and despite his other more extensive works of political philosophy, earns an indelible reputation as the author of the blueprint for political dictatorship.  There is, of course, some truth to this claim, but anyone who views him or this work exclusively in this light just isn’t giving the man enough credit.

Machiavelli has performed a tremendous service to humanity by writing this book. Not because it’s advice that should be followed. The genius of The Prince is that it is an unvarnished examination of the true nature of political power.  The Prince is an unflinching exploration of power stripped of contemporary political doublespeak, wonky policy talking points, feelgood platitudes, postmodern obscurantism, or academic jargon.  It reveals the mind of brute, naked power spelled out in clear, lucid English that anyone can grasp.  Some of his observations are incisive insights about human nature and group mentalities.  Anyone who wants to understand the mind and motivations of any politician should absolutely read this book.

Anyone who thinks that a 16th century Italian Renaissance political discourse holds no relevance in 21st century liberal democracy is sorely mistaken. Machiavelli was affirming the power of the 16th century city state, but his thought formed the bedrock of modern republican democracy and has lost none of its importance. If modern politicians and apparatchiks spoke with as much clarity as Mr. Machiavelli, people might regard politicians and political power with the suspicion and contempt they deserve. Machiavelli’s book may have gained infamy by having Stalin, Mussolini and Gotti as fans, but let’s not forget that even the American founding fathers drew inspiration from “Old Nick.”  There’s no doubt in my mind that this is Frank Underwood’s favorite book.

Machiavelli is credited as the founder of modern political science, and there is a cold, calculated logic to this discourse. The most shocking aspect of The Prince is the casual manner Machiavelli accords political leaders a moral exemption from the rules they impose on their population. For the politician, there is no line of moral transgression that cannot be crossed. It is simply a matter of understanding the forces that might conspire to undermine his rule and take the steps necessary to preserve power.

The Prince is part history lesson and part instruction manual. Machiavelli is an astute scholar of history and the The Prince is filled with references to events and the actions of heads of state. He identifies both the successes and failures of these statesmen and pinpoints exactly which behaviors and decisions contributed to the outcomes.

Let’s take a look at Mr. Machiavelli’s observations and advice.

Everyone sees what you appear to be, few experience what you actually are.

And here comes in the question whether it is better to be loved rather than feared, or feared rather than loved. It might perhaps be answered that we should wish to be both; but since love and fear can hardly exist together, if we must choose between them, it is far safer to be feared than loved.

I’m hard pressed to think of a quote which summarizes American foreign policy or the police state as effectively as this one.

The vulgar crowd always is taken by appearances, and the world consists chiefly of the vulgar.

This quote applies just as much to physical appearance as it does the appearance of virtue.

…the incredulity of mankind, who do not truly believe in anything new until they have had actual experience of it.

I believe that Machiavelli made an incisive observation here. It’s been my experience that when arguing against government monopolies such as public education or infrastructure, the default rebuttal is that you oppose the underlying goal of education or transportation in general or you favor chaos and disorder or both. There is a strong tendency to assume that the status quo must not be disrupted and even entertaining the idea that free individuals could conceive something greater is regarded as naïve or reckless.

But when you disarm them, you at once offend them by showing that you distrust them, either for cowardice or for want of loyalty, and either of these opinions breeds hatred against you.

Machiavelli saw the importance and pitfalls of gun control long ago.  An effective state can’t afford to have subjects who will mount armed opposition nor can it afford to rankle those who assert gun ownership rights.  So instead you play a long game of propaganda, activist social science, and exploitation of public tragedy with good old fashioned manipulation of public sentiment.

A prince must not have any other object nor any other thought… but war, its institutions, and its discipline; because that is the only art befitting one who commands.

At last, we arrive.  This is what the state does best. This is its true nature and purpose. It doesn’t even need to be bombs dropped or boots on the ground. It can be wars on drugs, poverty, science, or women.  The net result is perhaps worse. Not only do people actually die, but civic virtue, civility and reason die as well.

The Prince is a remarkable work.  Its simplicity and bluntness are qualities that are all too rare today.  Nowadays, citizens and politicians revel in layers upon layers of abstraction and rhetoric in order to rationalize state violence. And even when politicians are explicit about the usage of force, the other side is convinced that their preferred application of state force is better than the opposing side.

The Prince is remarkable because it exposes the moral cancer that is eating humanity alive known as the State.  Is there any institution which sets individuals against each other quite like the State? How else does one explain the instant revulsion that political discourse breeds in certain individuals other than such discussions unmask a hidden brutality that lies at the core of political power? Machiavelli observed that the soldiers’ appetite for “avarice and cruelty” is sated through the military spirit of the prince. He was correct, but he didn’t extend the logic far enough.  It applies to the general citizenry as well.

One thought on “Niccolò Machiavelli: The Prince”